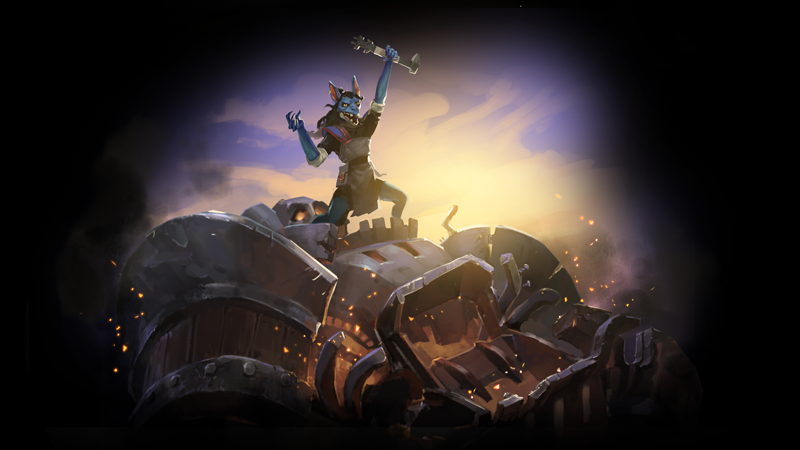 This one came in hot so please forgive any gram badder, who would have guessed that doing all this remotely would be so hard? Anyway, let’s get to it!

Initiative
The initiative rules haven't changed much, but the implications are different due to the round being shared across lanes. Players still take turns performing actions until both players pass in a row, and then you go to combat. This sequence continues across rounds, so while you can't control initiative across lanes you can still do so across rounds. There are more rounds per game, although each round is shorter. And "Get Initiative" spells still exist, although they have been renamed to "Quick."

Mana
There is now a single Mana pool that starts at 3 and increases by 1 per turn. Some cards and abilities are crosslane, but in general cards only affect the lane that they’re being cast from and you need a hero in lane to cast a card of their color.

Mana costs have been reduced for low-end and mid-tier cards, but high-end cards remain expensive. If you want to blow up a lane it might be the only thing you do in a round. Balance in the original game with these high impact spells was tricky – you had some decks that went from casting zero big spells to a big spell in every lane.

Initiative + Mana = Harmony?
Each action costs at least 1 mana, so without things like a refresh from CM, you can no longer delay turns for free - you need to weigh the costs of waiting to respond VS saving enough mana for your high impact spells.

The combination of one shared mana pool and adding a mana cost for all actions has taken some of the weight from the initiative system in the original game. The initiative system was something that experienced players enjoyed immensely, but had a steep learning curve for new players and had some really negative side effects if it caught you off guard.

Some players ignored initiative. Other players felt that controlling initiative was the main strategic concern, so we don't think this is a change that should be taken lightly. This disconnect may be responsible for the communication breakdown we see playing out in the community.

We think that the current system gets to a similar place where the actions you take, and the order you take them are both very important without the big downsides of the learning cliff and the resulting struggles with lockout.

New Defaults
We’ve been trying to move away the very technically-worded cards from the past. They were always very accurate, but sometimes it felt like you needed to be a programmer to work out what actually was going to happen.

Cards and abilities will affect a lane unless stated otherwise. Any verb (stun, disarm, etc) lasts until the end of the round unless another duration is set. All cards with persistent effects are labeled as an enchantments, and last until dispelled. All permanent modifications are labeled as such.

Arrows point forward by default but can be modified temporarily. At the end of the turn, or if you move the unit, its arrows reset.

Armor
Armor in the old game caused some issues – early in development we ended up doubling all stat values to compensate for how dramatic the impact of a single point of armor was. It also added a lot of math when you had multiple damage sources. Now each point of armor can block one point of damage and is refreshed at the beginning of the round.

Cleave/Siege
These used to be dependent on the unit being blocked to function. Now they are active all of the time.

Feeble
Feeble is new to the game, but we wanted to talk about it anyway so we could show off one of the basic hero reworks! Each unit attacking a feeble unit will deal excess damage to the tower instead. For example, if Debbi (4/3) is blocked by a unit (1/3), and uses "No Accident" leaving it with 1 remaining health, 3 damage will be dealt to the tower and her passive ability will trigger. 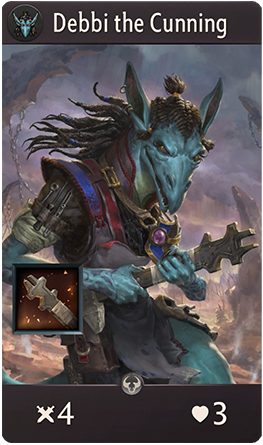 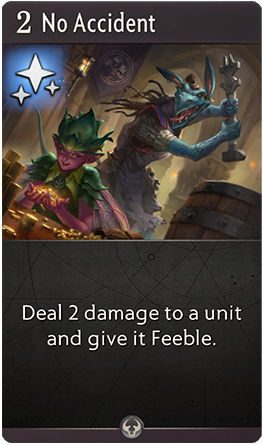 Card Unlocks
All players will unlock cards playing in any mode. The pace should be such that players are excited by getting fun cards to play with, but aren’t overwhelmed when they see too many new cards being played by an opponent.

Players that are new to the game, enjoy casual play, like to learn by doing instead of reading, or just enjoy a sense of progression would start in general matchmaking. They can grow their card pools while matching against opponents with a similar number of card unlocks, giving them a controlled environment to learn in. Hero Draft even pulls from the combined set of cards that you and your opponent have unlocked to keep things extra fair. Eventually these players can switch to Ranked mode and automated tournaments if they want to experience a more competitive environment.

There will also be the option to jump right in to scrimmages and custom tournaments, these will let players set rules or allow any card sets they see fit. All players will probably enjoy these from time to time, but advanced players can start playing these immediately.

Your Feedback
After our call for suggestions about how to improve the game, we were overwhelmed by the responses, both in the quantity (it took us a week to catch up on reading them all and they're still coming!) and also the quality. The community took the task seriously and wrote in with a wide range of suggestions, from gameplay changes and features through to feedback on localization and possible founder benefits. We aren't able to respond individually to every submission, but we were able to compile a list of promising ideas from the community and get a sense of where people most wanted the team to spend their attention. Luckily that lined up well with the teams internal plans. Here's a taste of some of the things people asked for, and our current plans.

Progression
The most popular request outside of gameplay changes was for more robust progression systems. People wanted to feel like their time spent with the game was being rewarded, and also wanted a better measure of their competitive strength so they could see themselves improving. We would like people to be able to feel a sense of progression in the game through unlocking cards and other collectables in the normal course of play, without being forced to spend money, but we're still experimenting with different reward structures.

For competitive play, we are working on a design similar to the Underlords ranked system, which we hope will provide people with goals to aim for, a clear path to get there, and a meaningful way to measure yourself against other players. We're also thinking through ways we might be able to connect these systems with Artifact's robust tournament support.

Quality of Life Features
Tracking your competitive rank is just one aspect of giving people the tools to improve at the game. We're also fleshing out player profiles, letting people track statistics about the games they've played, view match histories, and watch replays.

Additionally, we're looking at frequently requested quality of life and social features, such as chat history, the ability to spectate friends, access to more game modes when challenging friends, and saving templates for tournament settings.

Also in this odds and ends category is feedback that we got from many non-English speaking communities (sometimes read via machine translation!) that they would like to see a different approach to localizing hero names, preferring a transliteration of the English name, rather than literal translations of their names. We'll be talking to our localization team about this.

Single Player
A lot of you recognized the potential for telling stories about the DOTA world through Artifact and loved what we'd already done through comics and flavor text. We are doubling down on that effort through a single-player campaign which will both teach new players the game and continue the story that began with A Call To Arms. Tying in to our progressions systems, we want people to feel rewarded no matter which way they choose to play the game, whether it be in competitive play or the campaign.

Looking forward to your thoughts!