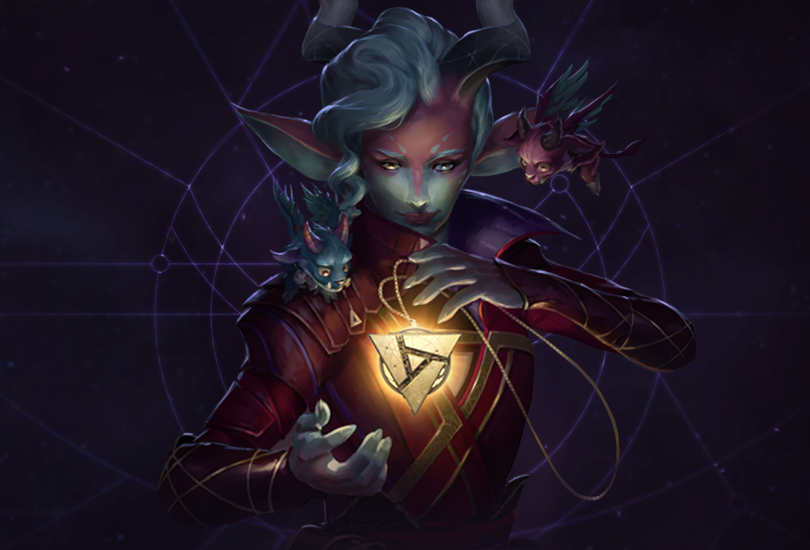 Q. What do I get when I buy Artifact?
Your purchase includes 10 card packs, 5 event tickets, and two complete starter decks. The two starter decks are Red/Green Brawler and and Blue/Black Control.

Social Play includes user-organized tournaments, private lobbies, and the ability for open play. Open play enables you to create a freestanding invitation for players within a Steam community or your friends list to challenge you. Players will be notified that you're available for a game. Open play enables players to easily find matches within their own communities.

Casual Play includes bot-matches, global matchmaking, and the casual constructed Gauntlet. Bots own all cards, so you can make a deck for the bot using any card released for Artifact, not just the cards you own, making them great for practice and learning. Global matchmaking lets you quickly find a constructed match against another player. The casual constructed gauntlet gives you a way to play a deck against a series of increasingly challenging opponents. There will be other casual Gauntlets in the future.

Expert Play are a series of Gauntlets that offer prizes and greater risk vs reward.

We are also running a Call to Arms launch event where you will attempt to build the longest win streak you can with one of six powerful preconstructed decks.

Sometimes a mode will be preconstructed meaning that you must pick from a set of decks specifically designed for that event.

Q. What is Draft?
In draft play you build a deck by picking your cards from a series of packs. You pick 60 cards and then build a deck from that limited pool. Draft tests your ability to properly evaluate card strength in a rapidly changing environment.

Q. What's in a card pack?
You receive 10 packs of cards with your initial purchase of the game. Each pack contains twelve random cards from the Call to Arms set, including one hero, two items, and at least one card of the highest rarity. Additional packs can be purchased for $1.99.

Q. What other ways can I get cards besides buying packs?
Players can buy and sell individual cards via the Community Market. Groups of cards can be bought and sold on the Marketplace in a single transaction using the in-game Collection interface. See this link for more information on the Market.

You can also earn packs by winning games in Expert Gauntlets.

Q. Will there be other ways to transfer ownership of cards besides the Community Market?
Not at launch.

Q. What is a Gauntlet?
Gauntlets challenge players to win a number of online matches before being knocked out due to losses. For example: "Win 5 games before you lose 2." Some Gauntlets reward tickets and packs as prizes based on how many wins you achieve. These prize-granting Gauntlets require event tickets to enter. There are also free Gauntlets that do not require entry fees.

We've designed the Gauntlet system to be highly modular. Each Gauntlet has an expiration date where it cycles, possibly changing formats, structure, or rules.

Q. What types of Gauntlets are available?
At launch the following Gauntlets will be available:

Casual Gauntlets (No Entry Fee)
Expert Gauntlets (Prizes + Entry Fee)
At launch, all Gauntlets are win 5 before you lose 2, except for Call to Arms preconstructed which tasks you with winning as many games as you can before losing 1.

Q. What are these prizes and entry fees you speak of?
At launch there will be the following prize structures:

These structures aren't written in stone and might change in future Gauntlets.

Q. Why does Keeper Draft require 5 packs?
You keep the cards you draft in this mode, so you provide packs for the draft.

Q. How does matchmaking work in Gauntlets?
Your opponents are matched based on two criteria. You are matched against opponents with the same number of wins and then within that group you are loosely matched by your Match Making Rating (MMR). (Loosely means matched in very wide bands that will expose you to a variety of types of opponents.)

Q. Whoa, that's a lot of talk about entry fees... Remind me again what I can do for free?
Sure! We've written a lot about paid modes because they are complicated, not because they are the only or even the main way to play Artifact.

Bot matches are a way to playtest, improve your skills, or learn the basics without having to deal with a live opponent. The global matchmaking pool is a great way to test out new deck ideas or get familiar with new cards against real opponents. The free constructed gauntlet is a competitive mode where the opposition gets stronger the more you win. There's also the preconstructed Call to Arms event where you can play with powerful cards you don't own. We also expect to host a variety of other free, competitive gauntlets in the near future.

You can also invite anyone in your community to challenge you through open play and private lobbies.

One of the most interesting ways to play for free are user-created tournaments...

Q. What is a tournament?
A tournament is a type of event created by players, groups, or organizations. Tournaments are modular, with formats, duration, and structure all determined by the tournament host. Tournaments are a key feature in Artifact, and post launch we intend to make them even more configurable and flexible based on the needs of the community.

Q. What types of custom tournaments can I make?
At launch, Swiss and single-elimination formats are supported in a huge variety of configurations. You can also choose what types of cards are allowed. For example, you can create a commons-only constructed tournament, or a tournament where all participants use the Call to Arms preconstructed theme decks. Tournaments can be short 4 player events completed in an evening or extended league-like marathons played over weeks.