Upkeep kills are the most delicious of kills.

Not all hero kills are equal. Losing a hero in combat is generally the least painful way to lose a hero. Your hero delivered their combat damage, blocked damage, and was there the whole round – so contributed their presence to your ability to play cards and use their activated abilities. The death will result in your hero losing one turn of presence (the following turn) for the sometimes sizeable advantage of relocating. Of course a hero with quick redeploy doesn’t even suffer that – really losing such a hero is only about the 5 gold you lose to your opponent.

Losing a hero during the action phase of the turn starts to change the equation some. In any case this will cost your hero at the delivery of combat damage and the possibility of blocking damage. How relevant that cost is will depend a lot on the hero and the situation, but your hero is definitely losing more than just a single turn – they are losing 2 combat rounds. If this happens early in the round you will also may begin feeling the loss of opportunity that comes with the heroes presence during cardplay – you might not get the opportunity to play all the cards you want to or use all the abilities that hero comes with, or is granted by their equipment. This can start to feel a lot like losing a hero for an entire extra turn.

When you take this to the extreme you get a situation that players will often strive for – destroying the opposing hero before they get a chance to do anything. This involves making sure priority is possessed at the key moment – so the hero being destroyed doesn’t have the chance to enable one spell or special ability. This is very much like losing a hero for an entire additional turn. 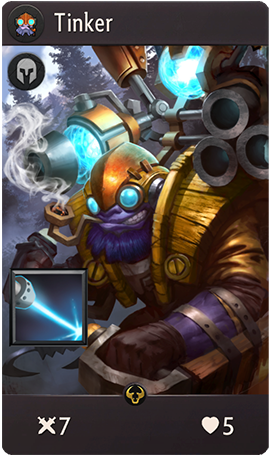 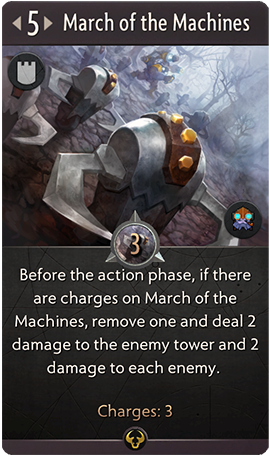 The ultimate expression of this is the upkeep kill – a kill that stems from an effect that happens at the start of the round before any heroes have had a chance to act. Any card that gives the potential for an upkeep kill should be weighed as providing more value than it first may appear, at least to the untrained eye. An example of such a card is the March of the Machines, which is the include card for Tinker, a black hero. March of the Machines is an improvement that does 2 damage to the enemy tower and each enemy before the action phase, as long as it has charges (it begins with 3). With this improvement in the lane, if you can get enemy heroes low enough you can score an upkeep kill. You set this up during the action phase for that lane – or using cross lane damage from other lanes. Once your kill is in place you don’t even have to worry about getting priority to make the first move in the lane – you will effectively be scoring a double kill.