Richard Garfield on Losing a Hero
October 31, 2018
Losing a hero might not be as bad as you think.

Many players immediately gravitate to red because the heroes are often huge and robust, and the feeling of losing a hero on the flop is so bad. Red is solid – but it doesn’t dominate – and that in itself indicates the penalty of hero death is probably overrated. The loss of a hero can hurt a lot; the temporary loss of the attack and block the hero provides, and the reduced flexibility in card play make it generally something to avoid. And then on top of that your opponent scores some gold for the kill.

To really understand the cost of a hero dying you have to understand how good it is to be able to redeploy your heroes. When your hero is destroyed they sit out a turn, and then they can be put into any lane. It is hard to overstate how important and powerful this ability is. In general you only have to win 2 lanes, and so focusing your power correctly is vital to success in Artifact – it could involve sending backup to a key lane, or dropping into a lane in which you want to slow your opponent. If you are playing a multicolor deck you generally can’t play all your cards in every lane – this will allow you to play cards of the appropriate color into the perfect lane. If your hero works well with allies you can guarantee they have some – either choosing a lane that you have population in, or deploying it with some creeps that are heading into a lane.

An example of the power of redeployment – the hero Necrophos with his Heartstopper Aura. This makes the hero deal 2 piercing damage to its enemy neighbors at the start of a turn in a lane. If you have this aura is active within a lane, dealing with it is sometimes not too bad, I just make sure my neighboring heroes have over 2 health so they don’t die on the outset of the next turn. When I destroy a hero with this aura, and it is ready to redeploy – I might find myself panicked because I have to make sure every one of my heroes and important creeps have over 2 health – you are threatening them all! 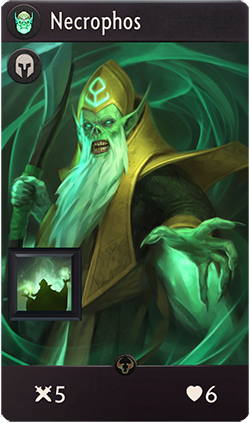 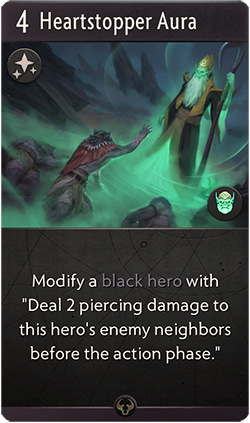 This example actually points to another reason players often overestimate how bad hero death is – because of most other card games at some level they equate death with reset. In Magic an enchanted creature loses its enchantments. In Hearthstone unless it specifically indicates otherwise a creature leaving play to the hand or the deck becomes reset – to a generic copy of itself. This is profoundly untrue in Artifact. In Artifact equipment and permanent modifications – of which there are many – survive death. Is Necrophos about to die? In Magic or Hearthstone upgrading him with Heartstopper Aura would typically be a waste. In Artifact it is priming a bomb.

While it is sometimes difficult to appreciate the upside of a hero dying early in the game – it often becomes clear late in the game. A good player will find themselves intentionally not killing an enemy hero so he or she can’t redeploy to a more useful location. With great force of will I can restrain myself from killing an enemy hero in these circumstances. A good player may even find themselves pulling the trigger on their own heroes so they don’t have to rely on the shop providing a town portal. I confess, I can’t bring myself to do that.